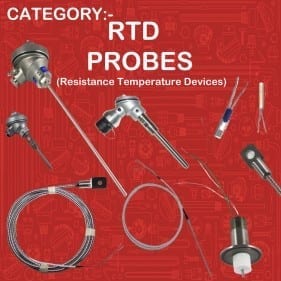 Due to the need in Industry for greater accuracy and stability of the Resistance Temperature Device(RTD) are more widely used.
The Platinum RTD, having a normal resistance of 100 ohms at 0°C and a temperature coefficient of 0.0385 is regarded as a world standard.  RTD’s are constructed in two categories.

Thin-film elements are cheaper and more widely available because they can achieve higher nominal resistances with less platinum.

Their disadvantages, compared to the Thermocouples, are:

Within the above types gold and silver are rarely used within the industry, copper is used in an economical situation but the bulb tends to be longer than that of a platinum bulb and the max temperature is only 130°C. Tungsten has a high resistance and is used in very high-temperature situations, it is brittle and difficult to work with. In most cases, the RTD is made from Platinum or nickel which tends to have a drifting problem and is non-linear in its scale over time.
The most common RTD used is the Platinum pt100 ohm which offers excellent accuracy over a wide temperature range from -200 to 850 C.

The advantages of RTD’s include:

The two common ways of measuring industrial temperatures are with resistance temperature detectors (RTDs) and thermocouples. The choice between them is usually determined by these four factors.

The D&N team can lend their 35 years’ experience to assist you in choosing the right RTD sensor for your needs. We also carry a range of stocked RTD sensors for immediate shipping.